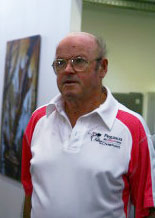 Tom Glenn does not strike you as the kind of person who accepts anything less than 100% effort from himself. He is a high-achieving salesman, a sports enthusiast who played senior level cricket, as well as several other sports. He has also survived a brain stem stroke, which initially rendered the left side of his body useless. “I’ve never been satisfied unless I’ve competed fairly and done my absolute best,” he says.
“I happened to be awake at 4am on April 2nd, 2012, which probably saved my life,” says Tom. His partner Linley got him to hospital swiftly, where he suffered a second stroke. “I had no feeling on my left side after the second stroke,” he says. “I was lying in bed, feeling worthless, while the nurse explained what was going on. So, I accepted what had happened and that something was wrong. I listened to the doctors and the experts and did as I was told and worked harder than I ever had in my life.”
After 66 days in hospital, he became the first person in 14 months to complete the entire prescribed physiotherapy programme and was able to walk out. “Apparently most people just can’t do it – that wasn’t going to be me,” he says.
Despite such success, by December his left arm was permanently attached to his left side and non-functional. He was offered the opportunity to trial the ableX armskate system and jumped at the chance. “I’ve never been a computer buff but the system was so simple to use, “ says Tom. I progressed to the ableX handlebar fairly quickly. I don’t call the exercises ‘games’, I call them disciplines, because that’s what they are for me. I worked my way from intermediate to extreme – I consider ableX 100-200% beneficial to me. I can now move my arm 30 cm away from the side of my body and I’ve regained function that no one thought was possible. It means I can dress myself, and be far more independent. I can even do a bit of work in the garden!”
When he goes out, he wears his arm in a sling and uses a cane, “mostly to make people aware that they need to be a bit careful with me.”
Tom has nothing but praise for the health professionals he has worked with, but feels there are gaps in the rehabilitation process. “We need to look outside the square when it comes to occupational therapy and physiotherapy. I loved being able to help myself with ableX. Traditional is out. We need to get in tune with today’s world – that’s computers.” Tom’s stroke experience inspired him to start writing a book, which is nearly finished, although he is unsure how the story ends yet. Ironically, in his book he speaks about the fact that the day his brain let him down so badly, was also the day that it had to become more active than ever before.
One gets the sense that his phenomenal drive will result in improvements that continue to defy the odds for years to come.