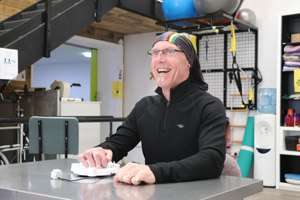 Colin Weston – “Do not put him in a box”

In January 2013, an otherwise fit, healthy and happy Colin Weston suffered an idiopathic carotid dissection while walking home with his son after a mountain-bike ride in Queenstown.

After a harrowing 48 hours, his chance of survival looked promising, but his prospect of recovery was deemed poor, at best.

However, Colin had many factors on his side; a healthy, well cared-for body, a strong internal motivation and a rock solid family, led by his wife Fiona.

“From the get-go, I told them not to put him in a box,” she said, “I didn’t make many friends, but I refused to accept the status quo and set about researching how I could help him.” ‘Helping him’ included daily visits to the hospital to massage and stretch his paralysed right side to keep as much mobility as possible and championing his needs. He suffered post-stroke fatigue, which made being in a busy, noisy ward too much for him.

“We never lost him as a person,” says Fiona, “even though he couldn’t speak, I knew he was in there.”
To assist him, she blew up photographs of his family, labeled them and put them up in his room. She also wrote his story and pinned it to the wall behind him, to remind the health professionals he was more than a man lying in a hospital bed – he was a loving family man, a former policeman, a HR consultant, a sportsman, a motivational speaker.
Colin was discharged from hospital after three months, only just walking. He also had his unbreakable spirit. In the process of researching rehabilitation options, Fiona came across speech therapy applications for their iPad and heard about ableX on the news. “I tracked them down and we bought one,” she says.
“It helped amazingly. It was motivational and he could work on it independently. That was invaluable. Initially he could only manage 10 minutes at a time, but he quickly progressed. He was so thrilled when he got the top scores. The beauty of ableX is that you can achieve a lot in a short space of time, in terms of value of time, it is amazing.”
A year on, Colin is walking and his speech is still improving. “His improvement has been exponential since the six month mark,” says Fiona. Still, he is working every day.